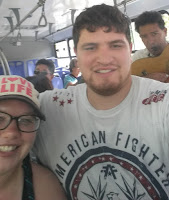 Winter is cold back home for a lot of people. The weather is great in Cancun. People have lots of vacation for the holidays from work and school. Cancun is PACKED. We had a pretty relaxed New Years Day. We went to downtown Cancun on bus, where we saw a street preacher sing songs on his guitar and get harassed by some chicos malos. We went to Wal-Mart which was pretty cool. It was similar to America, but they also had a great selection of Mexican goodies. The buses were jammed pack, and we waited until the fourth one to go back. 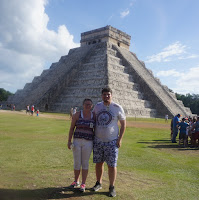 I was getting stressed out trying to find a way for us to get to Chichen Itza. I wanted to save money by arranging our own way there, but I found a tour for $50 a person, that included food, transportation, and entrances to all the sites, which included Chichen Itza, a Cenote, and Valloid. That was a steal! So I made the purchase, and was sketched out that there was no automated email to give me the  trip details. Instead, a representative of AllInOneCancun.com came to our hotel and gave us a handwritten receipt.

We woke up early, excited for our adventure to Chichen Itza. This  was was supposed to be a 7am to 7pm adventure. We were in for a full day of surprises. We went to the front of our hotel, and waited for a driver to show up at 7am sharp. There were several other groups waiting for drivers as well. As 7:15 rolled by, and other groups had their drivers pick them up, I was starting to wonder if we had fallen victim to a scam. Shortly after, a shuttle van picked us up, and we filled up the van with people from other hotels, where we met at a central location. They accepted our handwritten receipts and divided us into English and Spanish speakers and we boarded buses. The ordeal took a long time and we got a late start. Our tour guide Jose, said it was because it was the new year, and they were still disorganized. Jose entertained us during the two hour drive by talking about the Maya Calendar, culture, etc... Summer got sick and we stopped the bus so that she could throw up. 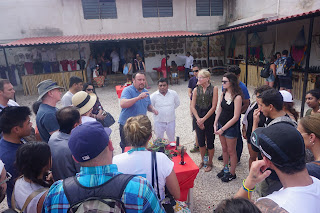 Our first stop was a buffet of "authentic Mexican food". The tour was disorganized, and we learned that the food wasn't prepared because another tour group was there, so we drove around a random Maya village trying to kill time. Jose told us that natives can't preserve their culture because they can't make a living in this modern world, so they'll join drug cartels unless we buy their marked up souvenirs. Then we drove behind the restaurant, where we met some Mayan shamans. They had us participate in an energy cleansing by standing in a circle, and they chose 4 of us to hold statues. We passed the statue to the right while the Shaman, had incense, had special water and plant leaves. He chanted things in Mayan and called the 4 people who initially held the statues. I was unfortunately chosen. He said that with the cleansing, the negative energies that stood in my way of starting a successful business would be eliminated. It was kinda spooky. 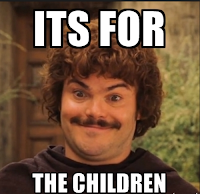 Summer did a free private spiritual cleansing, and we felt obligated to help out, so we thought we'd purchase one small thing, a massage rock. The rock was $20, and it wasn't disclosed beforehand, but the shaman "calibrated" the energy in the rock and that required a $40 "donation".

There was also a huge store, where nothing had a price, and there were 10 employees pressuring you to buy things. I was afraid to pick up anything, because an employee would walk up to you and try to sell it to you. They brought a small village child, and they told us that our purchases would fund his school, and that he was autistic and didn't learn how to speak until a year ago because of the money from purchases from tourists like us. 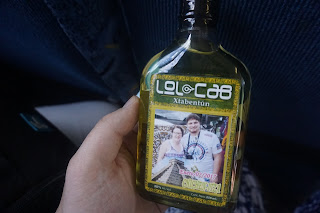 We finally ate the food, which was pretty good. They had some authentic food, like chicken, tacos, salsa, arroz con leche, and some non-authentic food like spaghetti, mashed potatoes, and mac &amp; cheese. They had some dancers bust out some mad skills, but then they wanted tips. Our server made it a note that we needed to tip him. Which was fine, but it felt like the tour companies have a deal with that establishment, and that establishment was just a huge shake-down.

Almost forgot to mention that they took our picture and put it on a bottle of tequila, and boarded our bus, trying to get us to buy it. 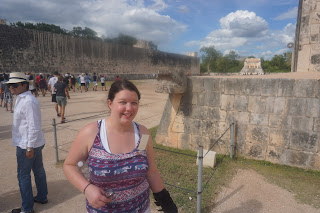 We drove to Chichen Itza. The line was yuuge. Last year, they said that there were 20,000 visitors in December. This year, they're averaging 20,000 visitors a day. There were way too many people! Tour buses lined up for miles, waiting to get in. (Literally, miles.) Our driver dropped us off a few miles away and we walked to the front entrance. I've never seen so many people and pandemonium. The Colosseum in Rome, the Eiffel Tower in Paris, didn't have crowds as crazy as this. Perhaps it's because Chichen Itza recently became one of the top 7 wonders in the world. 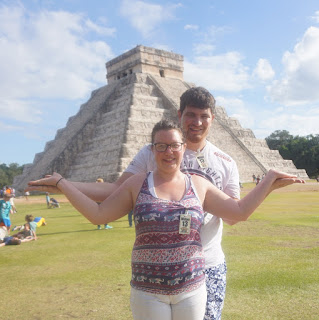 We had a tour guide, and he was pretty funny. He talked about the Maya culture, and what the buildings were used for, and then we talked about warrior practices and the funny hip game that they played in the movie El Dorado. He also showed us some cool poses to do, which didn't turn out when we tried them. Unfortunately, we didn't have a ton of time allotted to us to view the whole grounds. (Especially since we were running late). It was absolutely surreal and breath taking. I hadn't been so awestruck since I saw the Tower of Pisa. It's such an iconic figure, and it was amazing to see it in the flesh.
Everyone got to the tour bus on time, except one Italian guy who delayed us 45 minutes, because he lost his wallet. We were tired, and we were already over schedule, but we still had two stops to make. 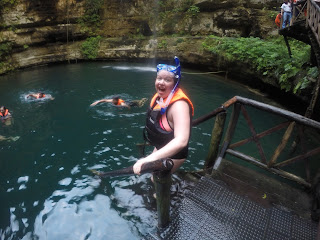 We went to a Cenote, which was awesome. It was a very refreshing escape from the unforgiving Yucatan sun. We didn't have enough time, I would have stayed there all day if I could have.

We then ended our tour at the small colonial town of Valloid. We got home around 9:30 pm. As were about to get to our hotel, they did one final shake-down asking us for more money. I gave some because, I don't think that they make much of a profit with our cheap tickets, and they had to stay extra late. We were exhausted after today! It was a little disorganized, it felt a little dishonest with all the shake-downs, but we overall satisfied, because we saw Chichen Itza, and got some fantastic photos.