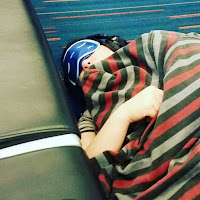 We left Pasco early Wednesday morning, to Salt Lake. We spend a few hours in the valley, packing and doing some errands before leaving to the airport again. Thanks to my sister for picking and dropping us off! We took Jet Blue, and it was pretty roomy. We had a 6-hour layover in Boston, which Summer took advantage of by sleeping, while I played Starcraft. 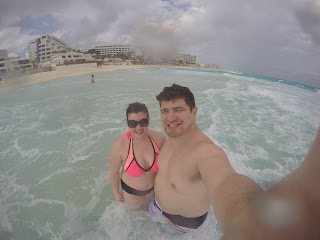 When we arrived, we were grateful that we traveled light. We brought two personal item back packs, one carry on, one checked in bag. We were instantly alleviated from the dry cold drudgery of home, and welcomed into tropical humid 80 degree paradise. We booked on AirBnb, and our host arranged a ride for us from the airport for cheap. The driver had a sign with my name on it, just like in the movies.

We stayed at the SolyMar hotel, in the Hotel Zone of Cancun. We 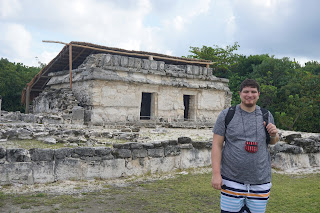 met our host in his office. He has many rental properties, and his wife helps him. They were extremely nice. We talked about some of the attractions, and restaurants in the area. It was brought up that I spoke Spanish, and he asked if I was LDS an
d served a mission. Turns out that he has LDS family in Tulum, and they've served missions. Also turns out that the wife lived in Malaga for while during the days of Franco.

The first day we were dead tired. We checked out the beach a bit, and then took a bus to the store to buy some groceries, and then we went to sleep.

We got a late start on the second day, and we swam in the Carribean Sea, hung out on the beach by our hotel, and went swimming in the hotel pool. The Carribean Sea was very rough and wavy, just like Tahiti. We went back to the store to get more groceries, and we walked around the mall a bit more. We got a few souvenirs. 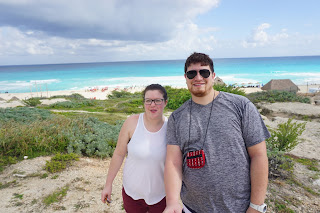 The third day, we walked 1km to the Rey Ruinas, an archaeological site. It was pretty cool. Perhaps the best part was the numerous iguanas. We proceeded to swim across the street in the Playa Delfines. It was almost identical to our hotel beach, but less people. 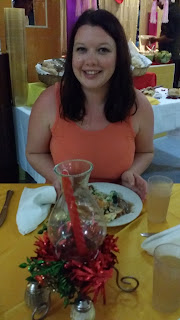 It was New Years Eve! We ate at our hotel's buffet. It was very fancy and exciting. The fruit and produce was so fresh and ripe. The meat was really delicious. 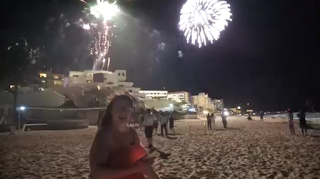 We went out onto the beach, while listening to the hotel's party band play. We did a countdown and toasted two bottles of Apple Cider after the countdown. We were awarded with firework shows from each of the hotels along the strip. It was truly exhilarating. There was a lot of tension among the people at the beach and the hotel party, everyone wanted to dance and let loose, but in the end, we all just stood around awkwardly, taking selfies and videos. 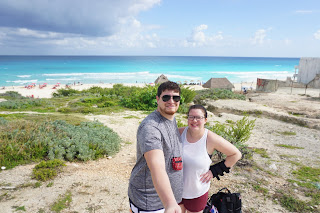 New Years Eve here in Cancun! Love the palm trees swaying cool Caribbean breeze, and the excited glow along the beaches, ready to welcome in the new year!

2016 has been a good year, with lots of cool things (albeit unexpected) to happen! Had both cars break down, bought two new cars, graduated school, got my first Junior Developer position, got my first Mid-Level Developer position, had brain surgery, started getting better gigs in my band, got a puppy, visited Mexico for the first time and got a new stamp in my passport, got a professional guitar rig (my Gibson Les Paul Custom Shop, and Orange Rockerverb 50 combo, and a bunch of pedals), and got my wedding photos! (Edit: I was on the news for my political opinion) 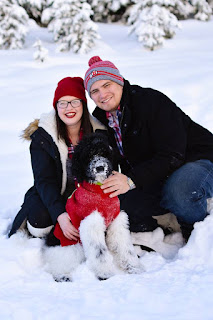 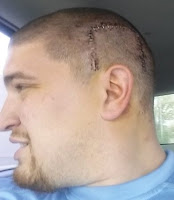 Now is the time to create New Years Resolutions. I not only wa
nt to set goals for the next year, but for the next 5 years, to help me reach my 25 year goals. Last time I created a 3 to 5 year plan was when I returned home from my mission in 2012. I've accomplished most of those things. Finishing school was probably one of the last items on my list. I share this not to show how ambitious or awesome I am, but more to write it down and motivate myself. Some of these are vague, and I might spend more time later to flush them out a bit more.

Posted by Unknown at 7:52 PM No comments: 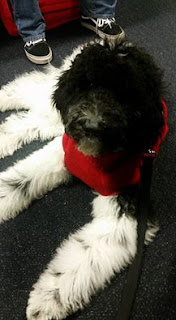 Christmas was very special this year! Like it is every year. We went to Pasco to go to Summer's family. It was awesome because everybody was there. I was excited because they let us out of work early on Thursday, and Friday was PTO for Christmas Eve. (Since the 24th was on a Saturday). We tried to pack light, because we had a guitar and our puppy to bring to Washington. We had to get an emotional support dog note from my Surgeon, details on what it must contain. He's trained and does really well with people, and doesn't have many accidents, but sometimes he gets a little nervous in huge crowds (like busy airports) and when he's got to poop, he'll poop in public places. We made sure to give him a long walk beforehand and give him an all-natural calming agent. He did fantastic, and he put a smile on everyone's' face. We started farting near the end of plane ride, so we carried until we got out of the plane ride that he didn't poop in the airport. Which he immediately did after we set him on the grass outside. 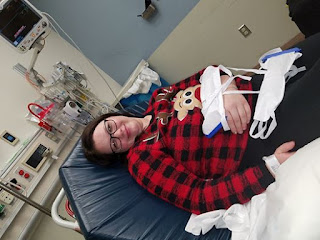 We had a great time. The food was fantastic, we had pulled-pork tacos Christmas Eve, and traditional food Christmas Day such as ham, mashed potatoes, green beans, etc... We were excited to give Spencer an acoustic guitar, because he used to play all the time, but he had to sell his gear, and hasn't owned a guitar in a while. I tried many guitars before selecting a Mitchell. Under the tree, we put a box full of guitar accessories such as a strap, capo, picks, etc... When he opened it, we were going to go grab a guitar that we had in our room. Summer full down the stairs and sprained her wrist while retrieving the guitar. So we had to go the hospital and get an x-ray. 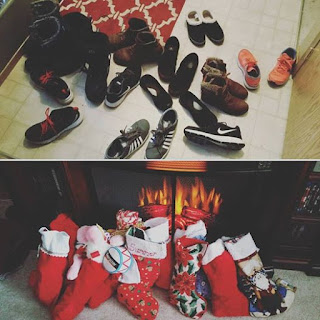 We went to Yakima to visit Summer's Grandpa and visit friends. I rented a car for my first time. We got a Toyota Camry, which was a really smooth enjoyable ride! I will say that the features were more sleek than our Subaru Impreza. But, it's only a two wheel drive.

It's always sad to get everyone together for such a short time and then have to say goodbye immediately after.

We plan on getting together next Thanksgiving!

Posted by Unknown at 6:52 AM No comments:

Email ThisBlogThis!Share to TwitterShare to FacebookShare to Pinterest
Labels: christmas

Welcome to the Adventures of Daryl blog

I originally created this blog to solely be a travel blog. I had the intention of being a traveler extraordinaire, and I was going to catalog a comprehensive bucket list of all the places that I want to travel to, and to document traveling to those places.

I definitely feel blessed to have traveled as much as I've had, and I'm going to make it a priority to travel, but I'm starting to realize that it might take longer than first anticipated to visit all these places and they'll be more spread out. So not a lot of entries are being made into this blog.

I've decided to make this my personal blog, and write about all random facets my life. I first liked the idea of dedicating many blogs to simple purposes, like a blog for professional endeavors, musical endeavors, my band endeavors, random endeavors, etc... but that's a lot to keep up with, and this is a lot easier.
Posted by Unknown at 9:25 AM No comments: 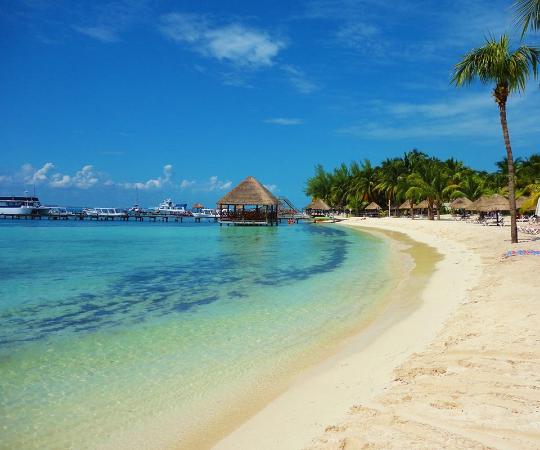 This Holiday Season, we are undertaking two back to back trips. We are first flying to Summer's family in Pasco, Washington to spend Christmas over there. We're especially excited, because the whole family will be there, which is not always easy to coordinate. Right after we get back, we'll have a ten hour "lay over" and fly straight to Cancun to spend New Years Eve and Three Kings Day.

Mako in the airport


It was challenging to prepare for both trips. Pasco will be cold and snowy, and we have a guitar to take, and our precious puppy. Cancun will be very warm and sunny.

Preparation for Cancun was challenging in the sense that nowhere sells summer clothes out of season. We ordered some stuff on Amazon, but a lot of it doesn't fit. We'll be able to return it for a full refund, but, we procrastinated, and ordered stuff like a week before we left.

Posted by Unknown at 8:29 PM No comments: