Thoroughly worn out from the chaotic, long, but rewarding Chichen Itza expedition, we took the next couple of days to relax, go to the beach, swim in the pool. We bought some boogie boards to try and ride the waves in front of our hotel. 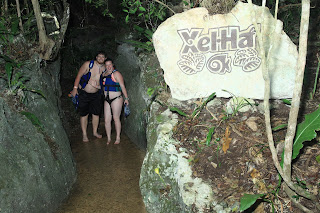 We wanted to snorkel in a body of water that had fish and was bigger than our swimming pool. Xcaret is a huge local company that has various theme parks and tour options. We were at first reluctant because of the entrance fee prices, but we decided that it would add to our overall experience. It was a very organized day. A huge bus with the company logo picked us up from our hotel at exactly 7:25, like was written on our printed out park ticket, which had to be signed in ink. We were given bracelets with our info on it, that had bar codes. We were each given a sticker depending on which park we were going, Xel-Ha in our case. We got off the bus, and there were bright colored lines (that matched the color of our stickers) on the ground that pointed which direction we needed to go to get onto another bus that would take us to our park. 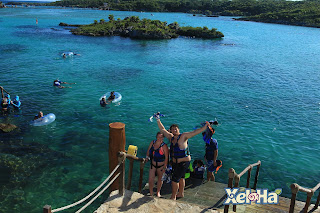 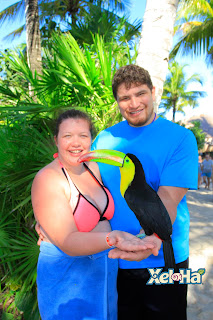 We tried to get a seat in the front so that Summer wouldn't get sick. We also came prepared this time with Dramamine. We had a representative of the park explain about the various attractions in the park, how the 5 included all-day buffets worked, and even a suggested order of how to do everything in the park. The park had everything included except, for 10 special activities, which required you to purchase another ticket, and they were close to $100 each. 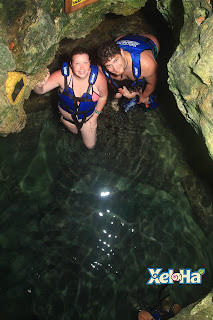 When we got to the park, they showed us the entrance, and how to find our way around the park. Near the entrance were the dolphins. I wasn't interested, but Summer was very interested. We initially thought that it was too expensive and the photos that they took were ridiculously expensive. (We talked about this over a year ago.) But in the moment, looking at those cute dolphins, and all the people enjoying the experience, we caved and bought a ticket for Summer. They take pretty good photos of you around the park, and I know in the past that they forbade people from bringing their own cameras, and then charging you $350+ for your photo package. But, we got the photo package for an additional $8, for unlimited photos.

Summer loved the dolphins! They did various tricks, and they got to pose with and play with the dolphins. I took a video, and took pictures from afar, because dolphin photos were extremely expensive. While my photos were surprisingly good, the park's were better, and we ended up purchasing them. 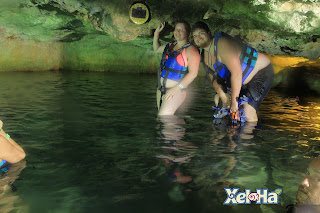 We enjoyed the breakfast buffet. We snorkeled in the main bay. Everything was provided, snorkel gear, life vests, etc... We had so much fun doing that, that we didn't realize that it was almost time for us to leave the park! So with only two hours left, we attempted to do everything else. It was a big loop. We went on some zip lines, blazed some jungle trails, saw some cenotes, swam in a narrow canyon, and swam in cave. It was a ton of fun, and we'd come again.
The whole thing was very organized, and everything was nice that it's included.

We were worn out, and used this day to rest and to get our things in order. We bought some souvenirs, and packed our stuff. Late at night, we got an email from JetBlue, informing us that our flight was canceled due to weather conditions. It took an hour on the phone to get another flight, one that would leave a lot earlier the next morning. 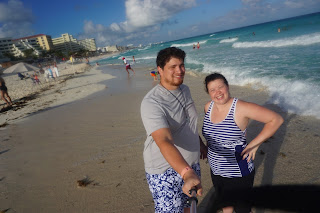 We took a taxi to the airport. The airport was packed, due to flight delays. It was crazy with the heavy snow storms everywhere in the US, and there was shooting at the Fort Lauderdale airport. It was a long grueling day. We flew to JFK for a layover. The snow was crazy. It took two hours to get our luggage from the airplane to the belt, and we had to check in the bag again. Our flight arrived on time, but the plane left 4 hours late. We got home at 4am.
Posted by Unknown at 4:43 PM