I'm practically a celebrity. I was in the news at the #March4Life event. 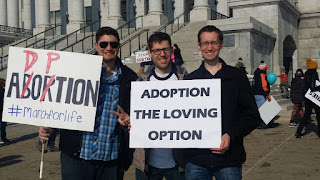 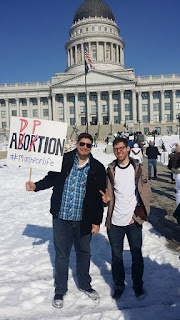 This past Saturday, I decided to go to the #MarchForLife event at the Utah State Capitol. What I really liked about the event, is that they were collecting donations of wipes and diapers to mothers in need. Summer couldn't go, because she was teaching some skin care classes for Mary Kay. I called up Tyler, my childhood friend and we went. We even ate at Kneaders before, it was fun. I had a few people heckle me on the way up there, because I took public transportation. At the end of the march, there was a rally inside the capitol with motivational speakers. Instead of marching right in, Tyler and I lingered outside, and mingled with some of the other marchers. We saw our high school friend Sam show up.

Lots of older people were ecstatic that 20 something year old men were at the rally, and wanted to take pictures with and of us. I got a lot of compliments on the sign I spent 2 hours creating. I wish I was that witty to create this, but I just copied an image that I saw on Google. People were really awesome, uplifting, friendly, and the whole event was family friendly. The highlight is when Tyler and I met a guy that complimented my sign. He had a Rush 40th anniversary tour t-shirt on. Naturally, I'm a huge fan rush, and I went to that concert. We instantly hit it off. The funniest thing he said was

“We believe in the right of the babies to a body,” said Tyler Ockey, who marched with his friend Daryl Bennett, displaying signs encouraging adoption rather than abortion.
Bennett said he understands why many associate those of the anti-abortion opinion to be more religious. But he said it’s more than a faith-based issue; it’s a human rights issue.

“I’m not quite sure why abortions are always a religious issue,” he said. “For me, it’s always been a human rights issue. I hope this will send a message that there’s a lot of us, especially us young people, that believe abortions shouldn’t be funded by taxpayer dollars.”


We also talked to a Fox 13 journalist off the record. She was interested in the general vibe of why people were there. I felt like I gave her a much more elegant and thought out response. I told her that I thought as a society, we can do more to help people to choose other alternative to abortion, such as adoption or raising the child. We can do a lot more in removing negative stigmas at those women, and let them know that we love them. We can also provide resources to show that we don't stop caring about children once they are born.
Posted by Unknown at 6:21 PM